In September 2020, the BPDA published a new report which demonstrated why the carbon footprint of concrete pipeline products is significantly lower than HDPE alternatives. In this blog, we explain the importance of functional equivalence and why a carbon assessment of drainage pipelines should include the pipe and its surrounding bedding, not only the pipe.

The concept of ‘functional unit’ in Life Cycle Assessment studies is not new. It was introduced well over 15 years ago in the ISO 14040s series of standards on LCA. It mainly looks at the need to account all the different elements that would enable a specific function to be performed. For example, a carbon comparison between turf lawns vs. grass seed lawns would not be restricted to the carbon footprint of turf rolls vs. grass seed bag(s). The comparison will need to look at every ingredient that would contribute to the growth of a lawn. Including land preparation, fertiliser, transport distances, water consumption, material wastage, performance, life expectancy of the lawn, etc.

The same applies to pipes. Rigid pipeline systems are installed differently to flexible pipelines (such as HDPE). Rigid pipelines are often installed with beddings which would require significantly less granular material as such pipes utilise their inherent strength and would function OK with granular only utilised around the lower half of the pipe. Flexible pipes are different as the structure will depend to a large extent on the surrounding bedding, leading to a full surround of granular bedding. More information can be found at our Factsheet on the influence of bedding on cost and carbon (see Figure 1). Such bedding plays the main role in a flexible pipe’s structural function and when considered as part of the functional equivalence debate in an LCA or carbon footprint comparative study, it makes a huge difference. 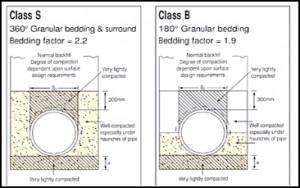 Figure 1 shows the difference between the two most common bedding installations for flexible (such as HDPE) and rigid (such as concrete) pipes. Bedding Class B, the most common class of bedding for concrete pipes, uses roughly half the amount of bedding used in Class S, which is the most common type of bedding used with HDPE pipes. The additional bedding with a plastic pipe ‘Class S’ installation will lead to more carbon emissions as more aggregate granular is used and transported to site. Figure 2 shows the carbon emissions associated with ‘Class S’ and ‘Class B’ bedding granular.