In September 2020, the BPDA published a new report which demonstrated why the carbon footprint of concrete pipeline products is significantly lower than HDPE alternatives. In this blog, we explore how the End-of-Life and decommissioning stage (also known as Module C) can make a significant impact and why any infrastructure asset assessment will need to look at that stage with scrutiny.

Module C is the lifecycle stage in which a building or infrastructure asset reaches the End of its Life (E-o-L) and is demolished, dismantled, decommissioned, or abandoned. Accounting for this stage in construction-related carbon assessments is compulsory under EN 15804 and a number of other standards such as ISO 21930 and PAS 2080. Although the process of accounting for ‘Module C’ in buildings is widely understood, accounting for the E-o-L of infrastructure projects, such as pipelines, is more complicated. Sewerage and drainage pipes inside cities, towns and suburban areas may be removed and replaced, but some sewerage pipelines and drainage networks in motorways are rarely dismantled and may simply be decommissioned and abandoned as specified in CESWI. Specifications across Water Companies vary for sewerage pipelines installed at shallow depth as total or partial asset demolition/ removal is sometimes necessary.

Even at product level, we have different interpretations of what might happen at the E-o-L. Both concrete and HDPE pipe manufacturers have in the past promoted deconstruction, recycling and reuse at the End-of-Life. With the rise of the ‘Circular Economy’ criteria, we will see more consideration of such principles in the design of concrete and HDPE pipeline systems.

Given this very wide interpretation of the most likely E-o-L scenarios (deconstruction vs abandonment), we decided to take an approach identified in draft standard prEN 17472, Sustainability assessment of civil engineering works – calculation methods:

PrEN 17472 (the 2020 consultation version) simply allows for all the E-o-L scenarios above to be recognised as long as, among other requirements, the site is made “ready for future re-use”. In other words, if a decommissioned pipeline would not hinder any future re-use of the site, then a partial-destruction and abandonment scenario (manholes partially removed, pipes capped and filled with foam concrete) may be considered. Otherwise, the assessment will need to account for total deconstruction and removal of the pipeline.

account for such requirement, and in the absence of any reliable data on the likely E-o-L scenario for pipelines, we simply decided to account for all possible scenarios. We modelled the scenarios as follows:

The process of digging out the pipelines was excluded as it was assumed to be similar for both systems as both would be of the same diameter size and within the same depth of cover. The process of crushing the concrete pipes was considered but all the CO 2 e emissions associated with crushing the pipes are negated by the End-of-Life carbonation and absorption of CO 2 (for more on carbonation, check this blog). Impacts from shredding the plastic pipes (ready for incineration or mechanical recycling) were excluded due to lack of reliable data. However, the impacts of recycling and incineration were taken from an academic study published in Nature journal last year. One impact we decided to exclude, due to lack of reliable data, is transport associated with recycling or incineration as information about the likely place where the plastic is recycled/ incinerated is unknown.

The E-o-L stage had a significant impact on the overall whole-life carbon assessment and is colour coded in Figure 1, below, in purple. 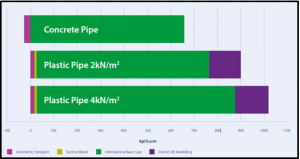 Our study clearly shows that, regardless of the carbon assessment methodology used for a pipeline project, it is very important to accurately account for carbon emissions associated with End-of-Life of pipeline systems. This is why a number of standards and specifications, such as the ICE Database and the LETI Carbon Primer, consider E-o-L as part of the definition of construction products’ “embodied carbon”.