Published by the Treasury in late 2013 the Infrastructure Carbon Review documented the prospect of infrastructure value chain participants to collaborate in the expansion of low carbon infrastructure developments. 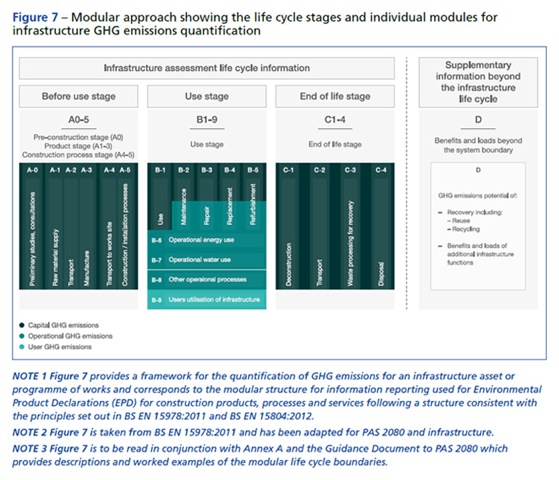 PAS 2080:2016 Carbon management in infrastructure was commissioned to facilitate this into reality. Mott McDonald and Arup developed the standards with support from the Green Construction Board (GCB). Figureheads within the infrastructure sector described the new standard as a ‘game changer’ which will pave the way for ‘consistency of methods and reporting’ across the supply chain.

It is specifically targeted to decision makers (asset owners/managers, designers, constructors and material suppliers) PAS 2080 provides a regular framework on how to manage whole life carbon when delivering infrastructure assets.

Manufacturers should take note that PAS 2080 introduces a new requirement for providing precise carbon data for their products, which ideally is 3rd party accredited. This puts emphasis on the whole life evaluation and through its adoption of boundary defined modular approach, carbon assessments now need to be more inclusive than ‘Bath University ICE database’ assumptions. In order to become a more reliable, representative and transparent format, similar to the one used in standards such as EN 15978 and ISO 21930.

THE CARBON FOOTPRINT OF CONCRETE PIPES

In 2010 we commissioned Carbon Clear consultancy to consider the performance of precast concrete pipes and manholes with their plastic counterparts. The study concluded that concrete pipes’ carbon footprint was 35% lower than the plastic alternative.